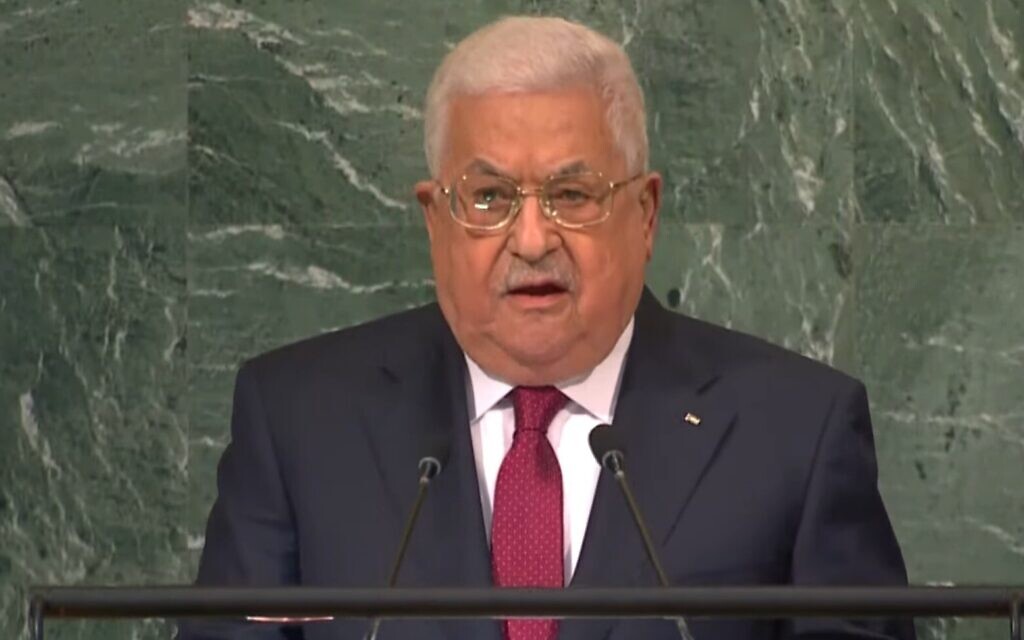 Abbas was speaking after Israeli Prime Minister Yair Lapid said in his speech Thursday that a two-state solution to the Israeli-Palestinian conflict was “the right thing.”

Abbas was expected to call on member states to back the PA’s effort to secure full-member status for the State of Palestine at the UN, a Palestinian official told the Al Quds daily. The initiative is doomed to fail, however, given the Biden administration’s refusal to back it in the Security Council.

Lapid’s decision to give full-throated backing-in-principle to Palestinian statehood on the world stage marked a sharp shift from addresses in the previous five years from former prime minister Benjamin Netanyahu, who largely used the pulpit to speak out against Iran and what he said was Palestinian rejection of Israeli peace efforts. In 2016, Netanyahu told the UN plenum he was committed to a two-state vision, but he later disavowed the comments.

Lapid said Israel had only a single condition for Palestinian statehood: “That a future Palestinian state will be a peaceful one. That it will not become another terror base from which to threaten the well-being and the very existence of Israel. That we will have the ability to protect the security of all the citizens of Israel, at all times.”

“You can ask us to live according to the values in the UN Charter,” he said, “but you cannot ask us to die for them.”

The news that Lapid would call for a two-state solution in his speech had drawn condemnation from the right flank of his governing coalition, as well as Netanyahu, who is currently opposition leader and his chief rival in upcoming elections.

In a statement released while Lapid was still delivering his address, Netanyahu accused the premier of “bringing the Palestinians back to the forefront of the world stage and putting Israel right into the Palestinian pit.”

However, the prime minister’s comments drew widespread praise from Lapid’s centrist and left-wing allies, as well as US President Joe Biden and Ambassador to Israel Tom Nides, who both called the speech “courageous.”